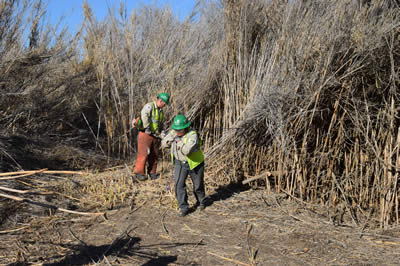 Weed control involves the containment, reduction, and/or elimination of certain plant species that are invasive and problematic in a landscape. Weed control methods include mechanical removal, chemical applications, cultural practices, grazing, prescribed burning, biological control, revegetation with native species, and integrating various combinations of these methods. Weed control can lead to increases in native plant species, forage quality for wildlife and livestock, wildlife populations, plant diversity, and soil water availability. It can also decrease allergens, restore more natural fire regimes into an area, and help prevent degradation of rivers and streams. Due to the variability among control methods and their effectiveness on different weed species, any weed control program should include consultation with the County Agricultural Commissioner, University of California Cooperative Extension Specialist, and/or a Pest Control Advisor.

Prevention is the key to good weed control. If a weed is on your neighbor’s property and is a known problem – keep it off of yours. If a weed is just starting to invade your property, and is a known problem – control it first. This will save you time and money later. Focus weed control techniques initially on the perimeter of source populations and progress toward the heart or center of the weed population. This will contain the spread of the weed while control measures are being taken. The more impact a weed can have on the overall ecological functioning of an area the more important it is to remove it early. Thus, species that are known to alter water flow, sedimentation, and other processes are high priorities. Do not waste time on species that you don’t have the tools to control; especially if there are other problem species you could focus your control efforts on more successfully.

Always follow the directions and precautions required on the label of any material or equipment you use for your personal safety, environmental considerations, and to maximize the effectiveness of your application. Personnel at the Ag Commissioner’s Office can provide guidance regarding herbicide applications and alternatives. Find them (and UCCE) at 1428 Abbott Street Salinas, CA 93901.